This is the Monster Cops Blog. Won't you join us over at MONSTERCOPS.COM 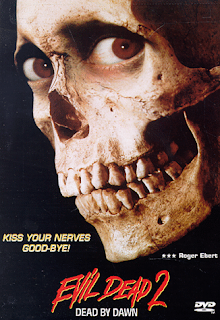 I can comfortably say that I've gotten at least one thing done on my list. I made my very own Necronomicon. Or to be exact, Necronomicon Ex Mortis. The horror geek in me has to specify that if I say Necronomicon then I'm refrencing H.P. Lovecraft's Necronomicon. When I'm actually leaning more towards the Book Of The Dead featured in Sam Raimi's Evil Dead Trilogy.

Legend has it that it was written by the Dark Ones. Necronomicon ex
Mortis, roughly translated, "Book of the Dead". The book served as a passageway to the evil worlds beyond. It was written long ago. When the seas ran red with blood. It was this blood that was used to ink the book. In the year 1300 AD, the book disappeared.

The Necronomicon has actually changed appearance throughout each Evil Dead film. Here's what some of them look liked.

The Necronomicon Ex Mortis from the very first low budget film Evil Dead. This lower budget version looks pretty creepy to me, but I was always much fonder of the look they used in the sequel.

Here's a frame from Evil Dead 2: Dead By Dawn.

A closer look at the version from Evil Dead 2. The budget obviously went up on the prop making. I do love this look quite a bit and is the look I was leaning towards when creating my own. 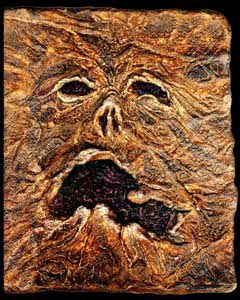 And this is the version in Army Of Darkness (Evil Dead 3). The prop making budget went all the way up this time around thanks to Universal Studios. Still holding to eerieness but looked alot more subtle with much better quality.

The limited edition DVD's of Evil Dead and Evil Dead 2 came in really cool looking Necronomicon covers. But even they somewhat differ from any of the above designs of the book. 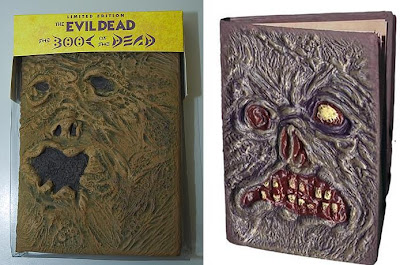 And here's the first pic of mine. 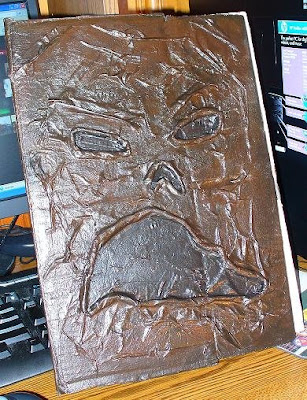 Wasn't going for exactness, but I wanted to stay with the same feel as the Evil Dead trilogy. I wanted the eyes on mine to be much angrier. This didn't actually cost me much to make since I had all the materials already. The base of it is a cardboard box duct taped together to form the actual cover and spine. The wrinkles in the skin were made from masking tape and duct tape. The eyes, nose, and mouth were formed with long rolled up pieces of duct tape then sealed down with masking tape. Then I painted it with acrylic, using black for the inside of the eyes and mouth, and the rest painted with brown mixed in with some cadium red.

Right now I'm sealing the whole thing down with Mod Podge sealer to give it some strength and so the paint won't run, just in case it ever gets wet (have you ever been on one of our sets?) I'm going to finish the back, and then fill the middle in with actual pages of monster drawings and images just as soon as Mr. Brandon White finishes them.

I'll post a video tutorial as soon as it's finished. This will actually only make an appearance in the current episode for about 10 seconds, but I think it will lend alot to the feel of this episode.

EDIT: 6/1/10
I had re-edited this for Indy Mogul and had successfully become a finalist to be the next host of Backyard FX. Didn't get the job, but the exposure was great, and I had fun doing it. Here's that version.

Posted by onespartan at 2:43 AM

To completely display my full vision for Monster Cops. To create a series and feature films that show the thrills, horror, action, comedy, and empathy that is Monster Cops.

To complete a series of episodes to show online, to gain funding and sponsorship to eventually make 2 more feature films to add to our first one (The Midnight Special), as well as to make more shorts/episodes.

To get everything that is Monster Cops out to it's intended audience. Anyone who loves a good mix of Monsters and Horror with Action and Comedy with just a touch of surprise and pathos.

To utilize these creative efforts to raise money for charities that need it.

CHECK OUT THE OFFICIAL SITE FOR THE ACTION HORROR MOVIE HERE